Chloroplasts are organelles specialized for fulﬁlling the photosynthetic function and represent microst-ructures with the length of 5–10 µm and a diameter of 2–3 µm, with spherical, oval, discoid or ellipsoid shape. In the majority of green plants ellipsoid chloroplasts predominate; this shape proved to be the most rational, developing during the evolution of the vegetal world.

The number of chloroplasts varies from 20 to 100 per cell, depending on the species, environmental conditions, foliar tissue. The plastids of the cell are constantly moving, either passively with the cytoplasmic ﬂow or actively, requiring energy consumption and being determined by light intensity and by other factors.

The origin of chloroplasts.

Chloroplasts represent a variety of the organelles speciﬁc for plant cells—the plastids, formed from the so-called proplastids, found in meristematic cells. Proplastids are colorless vesicles with a diameter of 0.5–1.5 µm, delimited by a double lipoproteic membrane containing a double stranded circular coiled DNA molecule with a size of 130–160 thousand base pairs (bp) encoding about 130 genes. Proplastids have no developed internal membrane system.

The cytoplasm of the mother cell contains some proplastids, which pass into the daughter cell during division, these proplastids in turn divide to increase their number. Thus, genetic characteristics determined by the chloroplast DNA are transmitted only through the maternal line (cytoplasmic inheritance).

Other types of plastids from plant cells, which may be colorless (leucoplasts, etioplasts) or colored (chloroplasts, chromoplasts) can be also formed from proplastids. With cell growth proplastids increase their size as well, the internal membrane is growing more intense, forming vesicles (thylakoids), which lie parallel along the stroma.

In the presence of light, these discs arrange in a certain position relative to the plastid axis, suffering a differentiation into stromal and granal thylacoids. This process is accompanied by the biosynthesis of lipids, proteins, chlorophyll and their inclusion in the structure of the membranes.

In the dark, etioplasts form, which have an internal structure similar to a crystalline network of protochlorophyllids (chlorophyll a precursors lacking the phytol side chain, which can be added only in the presence of light in angiosperms). Ethyolated tissue exposure to light causes the reorganization of the etioplast internal structure into a membranous structure, characteristic for chloroplasts (Fig. ).

Under the inﬂuence of certain environmental factors as well as according to a speciﬁc genetic program, chloroplasts can transform into etioplasts, amyloplasts (plastids that deposit starch) and chromoplasts (that are forming during the autumnal period in leaves and some fruits and ﬂowers during their maturation, giving them the characteristic yellow-orange color, determined by the carotenoid pigments).

Chloroplast transformation into chromoplasts is caused by the destruction of the granal thylakoide structure and the formation of a new internal structure under the control of the nucleus through speciﬁc proteins encoded by it and synthesized in the cytoplasm. For example, the 58 kDa polypeptide that forms complexes with carotenoids represents half of all the proteins contained in the membrane structures of the chromoplast.

The differentiation of plastids from proplastids into green photosynthesizing chloroplasts, into white amyloplasts containing starch or into yellow-orange chromoplasts, full of carotenoids and their inter-conversions are controlled by their own DNA and the nucleus-cytoplasm interaction.

The study of molecular mechanisms of plastid differentiation and transformation represents a big interest to modern molecular biology, because this knowledge allows to understand better the signaling systems, which ensure the coordinated functioning of the nuclear and chloroplast genome in the plant cell.

The fundamental substance of the chloroplasts, called stroma, is limited to the exterior by a double lipoprotein membrane (with the thickness of 10–30 nm) containing a large number of pores with a surface area of 30–40 nm2. The internal membrane, that has no pores, is less permeable in comparison to the external one, but it can be passed by molecules of trioses and amino acids. 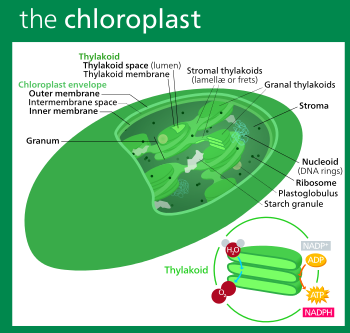 It forms folds called thylakoids (from thylacoides—“bag-shaped”) along the longitudinal axis of the chloroplast and which either have the form of overlayed disks (these are called granal thylacoids) forming the structures called grana (from granum—“granule”) or traverse the chloroplast from one edge to another—thylakoids of the stroma.

The number of grana in chloroplasts and the number of thylakoids in a granum vary within large limits. It is considered that a chloroplast contains about 40–100 grana and the total area of the thylakoids is 500 times bigger than the external membrane surface—a peculiarity that is considered an adaptation for carbon assimilation by chlorophyll given the low concentration (<0.03 %) of carbon dioxide in the atmosphere.

The chloroplasts of some superior plants, just like those of algae, have no grana, each 2–8 lamellas being united in “packages”. Chloroplasts can be of several types:

The synthesis of the proteins and lipids (glycosyl-glycerides) of the thylakoidal membranes is regulated by both the nuclear and chloroplast genomes. Approximately 50 % of the proteins involved in the formation of ETC complexes (40 proteins) are encoded by chloroplast DNA, the rest—by nuclear DNA.

The latter are synthesized in the cytoplasm then enter the chloroplasts, where, by binding speciﬁc proteins, they form functionally active protein complexes assembled and distributed in an oriented
manner in the thylakoidal membrane. There are several types of such macromolecular complexes which ensure the functions of absorption and transformation of the solar energy into that of chemical bonds (light phase of photosynthesis):

Benson cycle)—ribulose-1,5-bisphosphate carboxylase (RUBISCO). The functionally active enzyme is composed of eight small and eight large subunits (Fig.). The bigger subunit (54 kDa) is encoded by the chloroplast DNA, and the smallest (14 kDa)—by the nuclear DNA, which, after being synthesized (translated) in the cytoplasm, is transported into chloroplasts, where the correct assembly of the enzyme takes place in the presence of another chaperone protein of 60 kDa also encoded by the nucleus.

Proteins encoded by the nucleus with chloroplast destination enter the organelle using a localization signal (a peptide of about 40 aminoacids for stromal proteins and more than 80 for thylacoidal proteins localized at the N-terminus of the protein molecule.

This region recognizes the receptors of the external membrane of the chloroplast, triggering the transl-ocation of the entire protein into the stroma, where, under the action of a speciﬁc peptidase (signal peptidase) cuts the localization signal from the protein (by hydrolyzing a peptide bond). The protein can then be included in the corresponding poly-enzymatic complex.

The biosynthesis of proteins encoded by genes of the chloroplast genome occurs in the stroma—the fundamental substance of the organelle, which contains ribosomes, RNA, DNA and other components of the proteosynthetic system. Proteins, speciﬁc for thylacoidal membranes are distributed according to certain physical-chemical factors, including the amount of charge on the membrane surface.

Big differences have been noticed between the localization and the ratio of protein complexes within the thylakoids of the grana and that of the stroma. Photosystem I and the H+-ATPase complex are located in stromal thylakoids, while photosystem II and the proton pumps—in granal thylakoids.

The physiological activity of the chloroplast is ensured by a certain level of hydration (on average 58–75 %) and by a whole range of organic and mineral substances present in the stroma, in which the enzymatic reactions of photosynthesis take place (the dark phase).

The formation of all molecular and structural components which enable the physiological role of the chloroplasts  is ensured by the nucleus-cytoplasm-chloroplast interaction which explains the failure to obtain isolated cultures of chloroplasts on a nutrient substrate.

Gene regulation in prokaryotes and eukaryotes0