The Ectomycorrhiza or ectomycorrhizal root are characterized by the presence of three structural components:

(a) a sheath or mantle of fungal tissue which encloses the root;

(b) a labyrinthine inward growth of hyphae between the epidermal and cortical cells called the Hartig net; and

(c) an outwardly growing system of hyphal elements (the extraradical or external mycelium) which form essential connections both with the soil and with the sporocarps of the fungi forming the ectomycorrhizas.

Almost all of the plants upon which ectomycorrhizas develop are woody perennials. Ectomycorrhizal associations are formed predominantly on the fine root tips of the host, which are unevenly distributed throughout the soil profile, being more abundant in topsoil layers containing humus, than in underlying layers of mineral soil (Meyer 1973, Harvey et al. 1976). ECM fungi can make a significant contribution to the biomass of forest ecosystems

Figure 1. Diagram of ectomycorrhiza in longitudinal section illustrating the major features that occur in angios-perms (top half) and conifers (bottom half). Both have a mantle (m), Hartig net (arrowheads), and extraradical mycelium (arrows). The main difference between these two systems is that the Hartig net in angiosperms is usually confined to the epidermis whereas in conifers it forms around both epidermal and cortical cells. Figure 2. 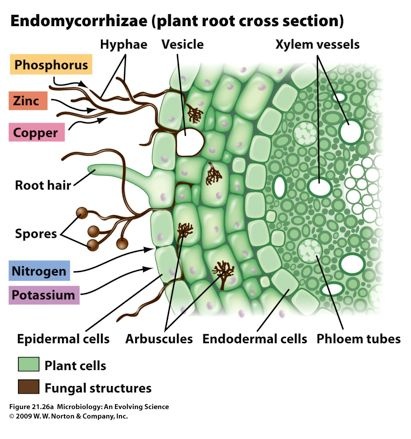 Ectomycorrhizas are usually found on tree species although a few shrub and herbaceous species may also develop this association. Conifer genera such as Picea (spruce), Pinus (pine) and Larix (larch, tamarack) form vast tracts of the boreal forest in the northern hemisphere whereas other conifer species such as Pseudotsuga menziesii (Douglas-fir) and Picea.

Ectomycorrhizal species in angiosperm genera, including Alnus (alder), Betula (birch), Fagus (beech), and Quercus (oak), occur widely in north-temperate forests of the world. In the southern hemisphere, the very large angiosperm genus, Eucalyptus, and several genera in the family Dipterocarpaceae are the dominant ectomycorrhizal tree species.

The majority of fungal species involved in the ectomycorrhiza symbiosis belong to families in the Basidiomycotina (basidiomycetes), with a few species belonging to the Ascomycotina (ascomycetes). One genus in the Zygomycotina, Endogone, can form ectomycorrhizas (Smith and Read 1997).

The sequence of events that results in ECM formation has been described in many studies (Chilvers & Gust 1982, Kottke & Oberwinkler 1986, Massicotte et al. 1987, Peterson et al. 2004). These events are summarised below.

The restricted growth of short roots may be necessary to allow ECM fungi time to form an association since these fungi have difficulty colonizing more rapidly growing roots. The long roots of many species rapidly develop a periderm, which prevents them from forming mycorrhizas.

Sclerotia, which are larger, resistant storage structures, may also be produced. Soil hyphae function by acquiring nutrients re-allocating resources for fungus reproduction or mycorrhizal exchange and by functioning as propagules for survival and spread of the fungus (Ogawa 1985, Agerer 1995, Unestam & Sun 1995).

It is well known that plant roots release compounds into their immediate environment and the importance of such exudates, mainly as nutrients for the general microbial population, is evidenced by the enhancement of this community in the rhizosphere.

Hyphae contact, recognize and adhere to root epidermal cells near the apex of young, actively growing, high-order, lateral root. These laterals are called short roots because they normally have restricted growth. These show attached hyphae on the root surface 1-2 days after the first contact with the root and the mantle and Hartig net after 2-4 days.

After ECM associations are established, mycorrhizal short roots often continue to grow by elongation and branching. Conifer roots with ECM have dichotomous branching patterns, while angiosperms have sympodial branching. The size, color, texture, and branching patterns of ECM roots vary with different host-fungus combinations, which are called morphotypes.

Hyphae penetrate between host cells and branch to form a labyrinthine structure called the Hartig net. Hartig net is produced by hyphae that penetrate between the outer cells of the root axis. This penetration is normally from the inner mantle) but can occasionally, for example in the case of Picea abies, occur as soon as hyphae reach the root surface and hence before the mantle is formed.

The depth of this penetration differs in angiosperms and gymnosperms. In most angiosperm species, such as Eucalyptus, Betula, Populus, Fagus, Shorea, etc., the Hartig net develops only around epidermal cells; further, development is blocked by the suberized walls of underlying exodermal cells.

One notable exception is the genus Dryas, where Hartig net hyphae develop around cells in much of the cortex. In the tree species Pisonia grandis, and perhaps a few other species, a Hartig net fails to develop.

The most pronounced feature of the Hartig net is its complex hyphal branching, often referred to as labyrinthine in nature, where tubular fungal hyphae are replaced by a multi-digitate mode of growth (Figure 73).

This increases the surface area for the exchange of nutrients. The cytoplasm of these highly branched hyphae is often enriched with organelles, including mitochondria, evidence for enhanced metabolic activity. Dolipore septa, typical of basidiomycetes, are frequent in Hartig net hyphae.

The Hartig net is involved in nutrient exchange in that it is through these hyphae that most of the sugars are absorbed by the fungus and mineral nutrients and water are passed to the root cells. Autoradiographic analysis has shown the pathway of sugars from root cells into Hartig net hyphae and then into the mantle and phosphate from the mantle into the Hartig net and eventually into the root cells (Bücking and Heyser 2001).

In both conifers and angiosperms, there is a gradient along the length of each mycorrhiza with the most active hyphae being located close to the root tip and senescence of hyphae occurring further back. Hartig net hyphae may also function as a depository for soluble and insoluble carbohydrates, lipids, phenolic compounds, and polyphosphates.

It is layers of fungal hyphae covering the root surface.

Once contact is made, the morphology of hyphae changes in that considerable branching occurs as well as an increase in hyphal diameter with continued hyphal growth, the root hairs and old root cap cells are incorporated into the developing mantle and the root surface may be enveloped by loosely organized hyphae or compact hyphae.

In the latter case, deposits of polysaccharides and phenolic materials are often present between hyphae. Some ectomycorrhizas develop cystidia in the outer mantle.

In both loosely organized and compact mantle types, bacteria are usually present on the surface of hyphae and between hyphae. In many ectomycorrhizas, differences occur between the inner, middle, and outer mantle. Inner mantle hyphae frequently branch repeatedly, increasing the surface area for the exchange of nutrients.

Although the main nutrient exchange interface in most ectomycorrhizas is the Hartig net, the repeated branching of inner mantle hyphae suggests that these may also be involved in bi-directional movement of nutrients. The fungus is capable of absorbing glucose and /or fructose from root cells and converting these into the soluble carbohydrates, trehalose and mannitol, or into the insoluble carbohydrate, glycogen.

These compounds may either be stored temporarily or for a longer term in mantle hyphae. In addition, mantle hyphae may accumulate other compounds including lipids, proteins, phenolics and polyphosphates.

The compact nature of mantles of some ectomycorrhizas may contribute to protection of roots from water loss as soils dry and from ingress of pathogenic organisms. Loosely organized mantles probably have little impact on these processes. Since the mantle interfaces with the soil, it potentially affects the transport of water and nutrient ions into the root.

Some bacterial species located on the surface of mantle hyphae (“mycorrhiza helper bacteria”) are known to enhance mycorrhiza formation and consequently plant performance (Garbaye 1994); others are detrimental to mycorrhiza development. Some bacteria associated with the mantle are able to fix atmospheric nitrogen, the fixation products of which can be utilized by the plant.

Hyphae that develop from the outer mantle into the surrounding soil are referred to as extraradical (extra matrical) mycelium.

It is evident that the extraradical mycelium can be an extensive network consisting of mycelial fans that permeate the soil and that may interconnect roots of the same plant and (or) other adjacent plants.The mycelium network often consists of hyphae and rhizomorphs, and in Cenococcum hyphae are thick-walled and pigmented

Some fungi, particularly in the genera Hysterangium and Gautieria, form ‘mats’ of mycelium that bind soil and fine roots. This mycelium that may be encrusted with calcium oxalate crystals comprises a significant portion of the biomass in forest soils.

Many ectomycorrhizal fungal species form complexes of extraradical hyphae (rhizomorphs or hyphal strands) that can vary considerably in their morphology, colour, and internal structure.Each rhizomorph (strand) consists of a variable number of individual hyphae that interconnect with each other by different mechanisms.

Some rhizomorphs have calcium oxalate crystal ornamentations of specific size and shape on the surface hyphae and these, along with other features, are often used in species identification.

In the more complex rhizomorphs, one or more central hyphae (vessel hyphae) are enlarged and these may have modified septa that allow for rapid movement of water and nutrient minerals (Cairney 1992). The peripheral hyphae of rhizomorphs may have thickened, pigmented walls that may be involved either in structural support or in providing resistance to the loss of water laterally.

At maturity, each sclerotium usually develops a melanized outer covering, the rind that surrounds a cortex (central area) of compact hyphae, and a medulla of loosely organized hyphae.Sclerotia are initiated in the extraradical mycelium, and are sometimes associated with rhizomorphs.

Hyphae branch, come into contact with each other, and form discrete structures. At maturity, each sclerotium usually develops a melanized outer covering, the rind that surrounds a cortex (central area) of compact hyphae, and a medulla of loosely organized hyphae.

Hyphae developing from germinated sclerotia are effective in forming typical ectomycorrhizas. Sclerotia as well as cultured mycelium can be used for long-term maintenance of fungal genotypes.

The extraradical mycelium, highly variable in structure, has a significant role in ectomycorrhiza functioning. The most obvious function of the fine hyphae that comprise much of the extraradical mycelium is the mobilization, absorption and translocation of mineral nutrients and water from the soil substrate to plant roots.

In those species with rhizomorphs, connecting fine hyphae may pass water and dissolved nutrients to these struc-tures for more rapid translocation through the wide diameter central hyphae (vessel hyphae) to the root. At some point, the extraradical hyphae and rhizomorphs interface with the mantle where transfer must occur to outer mantle hyphae.

The ectomycorrhizal fungi can obtain phosphorus from the mycelium network of a saprotrophic fungus and pass phosphorus to the host plant.Carbon compounds are translocated in the reverse direction from the host root to the extraradical mycelium for metabolic and growth processes, to developing sclerotia and their storage reserves, and to sexual reproductive bodies (e.g.,basidiocarps and ascocarps) that act as major sinks for host-derived carbon.

When we associated with certain fungal species, several conifers, including some Pinus species (Randall and Grand 1986), Pseudotsuga (Massicotte et al. 1992), and Tsuga as well as several angiosperms such as Eucalyptus (Dell et al. 1990), Quercus, Castanopsis and others, develop clusters of lateral roots known as tubercles .

Each lateral root in the cluster develops a mantle  and Hartig net, while the entire cluster of root becomes covered, to a variable degree by compact layers of hyphae called the peridium or rind .

Hartig net hyphae and inner mantle hyphae may store polysaccharides and proteins. The suggestion has been made that the rind may protect the enclosed ectomycorrhizas from pathogens and insects.

Bacteria that have been isolated from the surface and within the peridium of Pseudotsuga tubercles are able to fix atmospheric nitrogen; it is not known whether this nitrogen is utilized by the host.