In this article, we will discuss about the Difference Between Apoplast And Symplast Pathways. There are two types of transport pathways for the conduction of the water from one region to another. The path followed by the water can be Symplast or Apoplast pathway.

The Apoplast pathway is the path in which the water is moving between the intercellular spaces. The Apoplast includes the non-living spaces between cells and the cell membrane.

Both pathways are involved in the movement of water across the root. Water flows via the Apoplast in the cortex. It enters the Symplast pathway in the endodermis where walls are impervious to the flow of water due to the presence of Casparian strips. 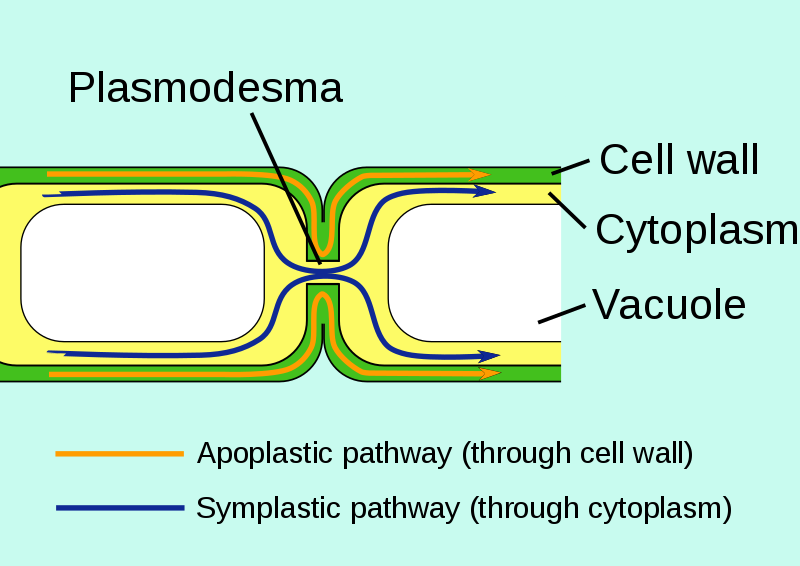 Moreover, this is one of the main pathways by which water and nutrients reach the xylem of the plant from the soil via roots. Water moves freely through this pathway. Also, low molecular weight solutes such as sugars, amino acids, and ions move between cells.

What You Need To Know About Symplast

The absorption of water by the roots of the plants takes place in two ways:

Inactive absorption, the water first enters the cell sap and passes from one cell to another. This type of movement where protoplasm is involved is called symplast.

In passive absorption, water moves through the apoplast of the root. The apoplast path includes cell walls and intercellular spaces.

Apoplast and symplast are two separate pathways in plants that initiate the passage of water along with ions from root hair via the root cortex to xylem elements. These routes may exist either simultaneously or separately having different rates.

Let us have a detailed look at the apoplast and symplast and the difference between the two.

Difference Between Apoplast And Symplast Pathways In Tabular Form

READ ALSO  Prokaryotes Vs. Eukaryotes: What Are the Differences?

Similarities Between Apoplast And Symplast

What do you mean by the apoplast pathway?

In the apoplast pathway, the water moves through the adjacent wall of the epidermis and cortex without entering the cytoplasm.

What is an apoplast?

The apoplast is the system of adjacent, continuous cell walls. It refers to the space outside the plasma membrane within which the molecules can freely diffuse.

Is apoplast active or passive absorption?

The apoplast is the passive absorption that takes place through the apoplast of the root that comprises cell walls and intercellular spaces.

What is the importance of the Casparian strip?

The Casparian strip is a band of waterproof tissue found on the sidewalls of the endodermis of roots. The strip prevents water from entering the pericycle that is important in inducing root pressure.